I have been making a lot of recipes with chicken lately and it’s getting a little boring. I love chicken and try to eat that more often than red meat, but sometimes I just need some beef. This recipe definitely fit the bill along with my craving for some Chinese food. I’ve been wanting to do takeout from our favorite Chinese/Japanese restaurant, but I think they’re closed due to a fire the other night. I was driving home and noticed a couple fire trucks outside the restaurant and tonight, the lights were off and a sign was on the door. Hopefully they’ll be back in business soon, they have the best sushi and singapore noodles!

This recipe was the perfect thing to make on a busy weeknight and even better, it’s made in one pot. That’s something my husband likes….only one pot instead of three. LOL! We made a deal, I cook and he does dishes. I think it’s working out just fine. 🙂 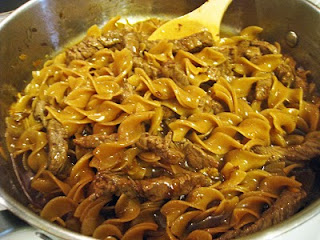 Heat a large skillet over medium-high heat. Cook beef in the skillet for 2 to 4 minutes. Stir occasionally until beef is browned. Remove from skillet and set aside in a bowl tented with aluminum foil to keep warm.

Add the broth, stir fry sauce, marmalade and cayenne pepper to the skillet. Heat to boiling. Add the noodles and reduce heat to medium. Cover and cook for about 10 to 15 minutes or until noodles are tender. The original recipe calls to also add sugar snap peas with the noodles, but I couldn’t find them at the store.

Stir in the beef. Cook uncovered for 2 more minutes until sauce has slightly thickened.