February 4, 2013July 15, 2014 Heather
I rarely cook large pieces of meats since most of our holiday dinners are either at my mom’s or my in-law’s house. Over Christmas, there was a great sale on ham and I picked one up figuring I could cook it up and then freeze part of it for another meal. It worked out perfectly. I wanted to make a glaze but different than the traditional brown sugar/mustard one and tried a fig-orange glaze instead. It was so tasty and I loved how both the orange and fig highlighted the ham. I’ll definitely be making this glaze again for the next ham I make! ﻿ 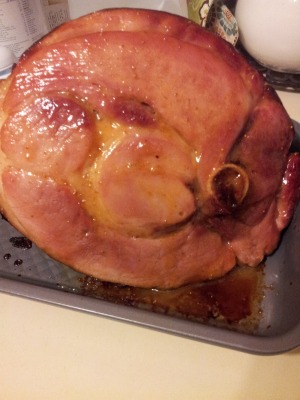 1 cup fig jam
2 Tbsp dijon mustard
grated zest of one orange
1/3 cup fresh orange juice
Following the instructions on the ham, bake the ham. 30 minutes before the end of the cooking time, remove the ham from the oven.
To prepare the glaze, combine the jam, mustard, zest and juice in a small saucepan over low heat. While stirring, cook until the jam melts but do not boil. Spoon half of the glaze over the ham and bake for the remaining 30 minutes.
Remove the ham from the oven and spoon on the remaining glaze. Transfer to a cutting board and carve.
﻿